Roll-Em-Up Taquitos has three stores open, but 11 deals for 80 units are in the works. With regional expansion plans, the company might just be coming to a center near you.

Roll-Em-Up Taquitos isn’t your average Mexican joint. Spanish music doesn’t blare from the speakers, there’s no chips and salsa on the table and you won’t find watered-down margaritas as big as your head. What it does have are fresh ingredients in an eclectic atmosphere that truly sets it apart in a crowded field.

The brand was founded in 2019 in Chino Hills, California, by Ryan Usrey, who loved his mother’s beef taquitos so much he believed they needed to be shared with the world. The company has three open stores in California, with four in the works in Arizona, which will remain corporate owned. It has just started franchising, and has 11 deals for 80 units in development after just three months of franchising. The corporate office is in Irvine, California. Sales sit at a little over $6 million companywide, with AUV at $1.7 million to $2.3 million. 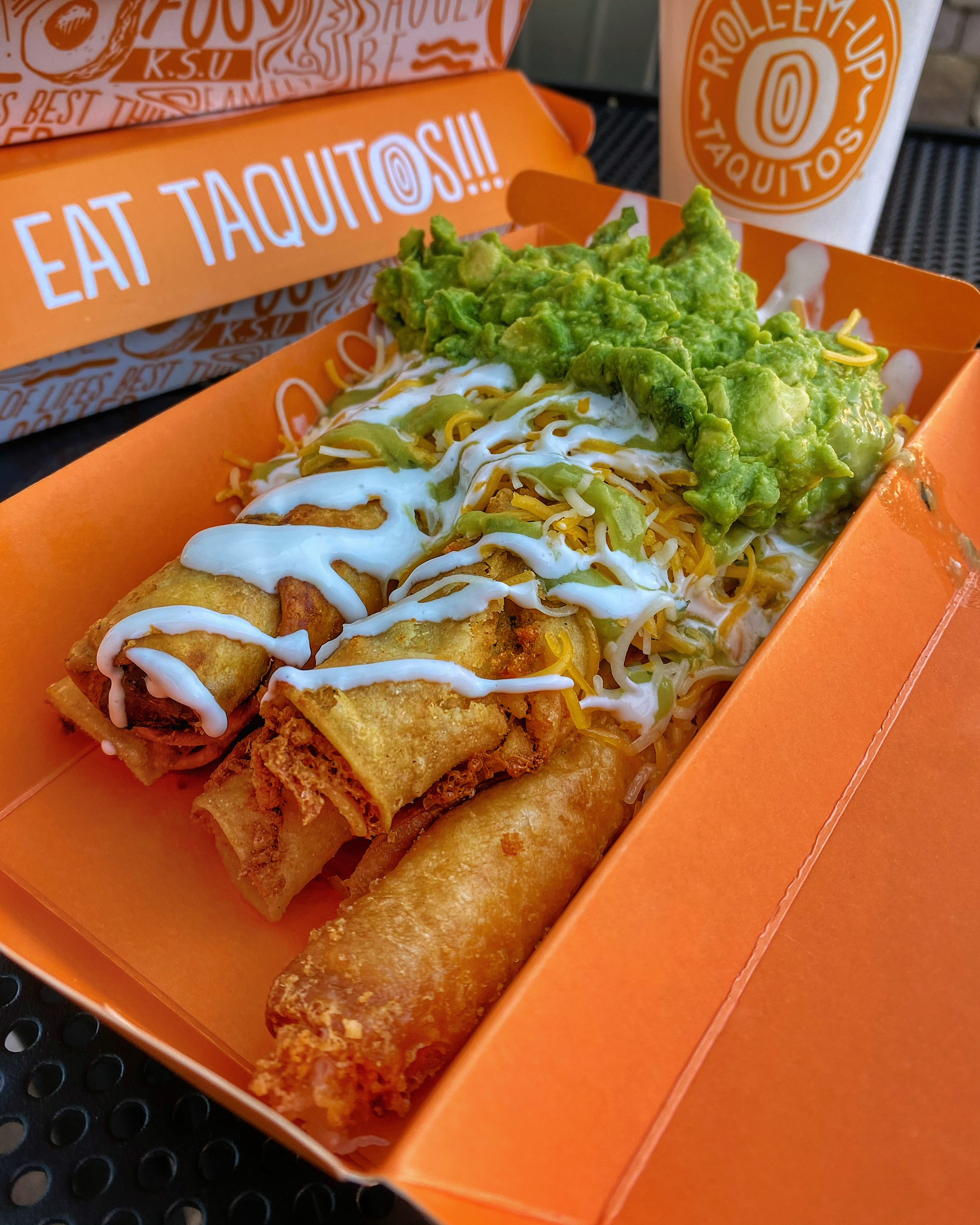 “Our family would basically just discuss that we wanted to create a taquito concept kind of like In and Out,” Usrey said in a phone interview with QRSweb. “We always looked up to their brand and how they keep it simple. We kind of wanted to follow that model. My mom passed away, and she didn’t get to see that dream come to reality.”

Usrey had been working in the clothing space and decided to jump head-first into making that dream come true for his family. “I’m good at branding,” Usrey said. “I know how to take something and turn it into a brand and create a cult following.”

He knew he couldn’t build a concept with just a beef taquito, so he entered the kitchen and created another four flavors: potato and green chile; avocado; cheese and chicken. The brand also added a flour tortilla to the traditional corn version and street corn, an LA staple with butter, mayo, Cojita cheese and hot Cheetos dust.

“As soon as we opened the doors, we kind of built a cult following,” Usrey said. “I haven’t met many people who don’t like taquitos, especially here in Southern California.

“Taquitos are on every Mexican restaurant’s menu, but they’re treated like a step kid, you know?” he explained. “They’re never the main act. It’s not your average taquito. Everything’s hand rolled, we cook all our proteins daily and the main thing is they’re pan fried in cast iron skillets. They’re not deep fried like everyone else’s.”

The company’s tortillas are proprietary, a little lighter and more flaky than the traditional version.

At the first location, the store was serving about 3,500 taquitos a day. “It doesn’t sound like a crazy amount, but imagine hand-rolling 3,500 taquitos a day,” Usrey said. “It just became too much as to how much we could push out of one store. We knew right away we were going to keep opening them.”

The second store opened in May 2021 in Brea, California.

“It’s a simple concept but from day one, the brand was designed to be a franchise model that was going to be nationwide,” Usrey said. “It was just a way for us to grow faster. It’s finding the right operators that believe in our systems and will follow it and will create the brand value.

“I feel like we’re growing at the pace we want to grow at. If we wanted to grow faster, we could. But we’ve definitely put the brakes on growing too fast. We’re growing from California out: California; Arizona, Nevada, Utah, Texas — we’re starting with those states and we’ll make our way to the rest of the United States and abroad.”

The brand is not selling any single-unit operation deals, opting instead for multi-unit agreements. It wants franchisees to commit to a minimum of three units, but five is the company’s “sweet spot,” Usrey said. The first franchise store will open at the end of Q4 or early 2022 in Colton, California.

Finding good real estate — especially in California — has been the biggest challenge, so the brand strives to find good Realtors and have good working relationships with developers to find off-market deals. Arizona, Usrey said, was an easier state to maneuver.

“California is where we are building our following, and Arizona, Utah and Nevada are our neighboring states so we feel it’s best to grow that way especially for distribution of our proprietary products,” Usrey said.

Everything is made in store with the exception of proprietary sauces and the tortillas, which the brand co-packs for consistency across the brand. “It just keeps our secret sauces protected,” he said.

Usrey attributes Roll-Em-Up’s success to its customers and serving incredible food that keeps them coming back.

Most restaurants go with certain colors to entire diners, he added, and “our colors are more inviting. In our restaurants, we don’t play Mexican music. Roll-Em-Up we just have a different vibe. … Every store is blasting reggae. It’s just different. It’s us.”